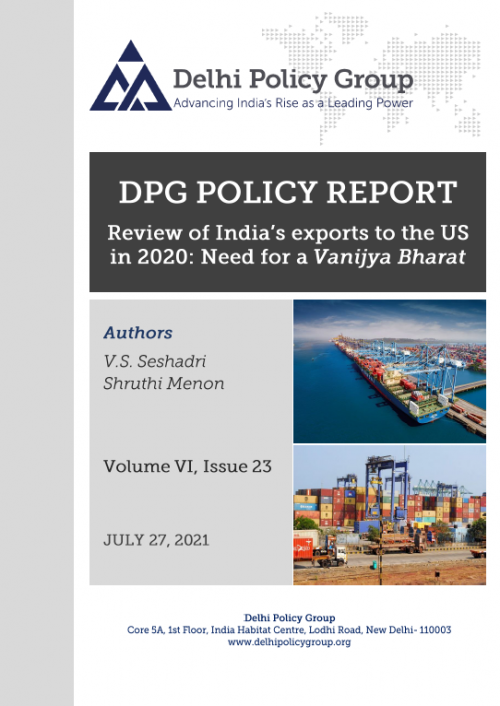 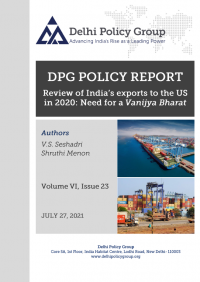 Review of India’s exports to the US in 2020: Need for a Vanijya Bharat

India’s exports to the United States declined by 2.78% during the COVID-19 battered year 2020-21, just as India’s global exports also shrank during this period. But much like the trend in recent years, India’s exports to the US performed relatively better compared to India’s overall exports, which declined by 7.1%, as per DGCIS figures. At the same time, there were some products that enjoyed positive rates of export growth.

As per US import figures for the calendar year 2020, that may have captured fewer months of Indian industry’s recovery phase after the first COVID-19 wave, imports from India were US$ 51.2 bn as against US$ 57.7 bn in 2019, which meant a contraction by 11.3% during a year when the US’s overall imports declined by 6.5%. India’s share in US imports, therefore, went down marginally to 2.2% in 2020 as against 2.3% in the year before, and India’s rank also slid to being the eleventh largest source of import from the earlier tenth spot. Imports from India in 2020 were even less than in 2018, when these stood at US$ 54 bn.

Imports from several other countries into the US also underwent declines but Vietnam, Switzerland, Ireland and Taiwan bucked the trend and improved their rankings considerably to the 6th, 8th, 9th and 10th positions respectively, as against the UK, France and Italy, whose rankings got pulled down. China continued to be the top source of US imports with a share of 18.6%, a shade higher than the 18.1% in 2019, but a few notches lower than the 21.6% share it had held in 2017, before the trade war erupted between the two countries. And if we are looking for countries that may have benefitted the most from the decline in China’s share in US imports, then ASEAN countries showed a significant rise in their exports. US imports from ASEAN went up steadily and significantly from 2018 to 2020, particularly those of Vietnam (62%), Cambodia (72.5%), Thailand (18%), Singapore (16.23%) and Malaysia (12%).

A mix of factors were at play in defining the US-India bilateral trade trend during 2020. First, India’s supply constraints during a year that saw several months of economic lockdown contributed significantly towards the decline. Second, the absence of GSP concessions for India’s exports since June 2019 made an impact. Third, was the opportunities created for third countries as a consequence of additional tariffs on the bulk of China’s exports to the US from late 2018. India could not fully avail of this opening, as it may have been able to in the absence of the COVID-19 impact. Several ASEAN countries performed better, Vietnam in particular, and significantly improved their market shares.

Fourth, there was increased demand in the US for certain COVID-19 related supplies. For example, imports by the US of Pharma items (HS 30), plastic goods (HS 39) and home textiles and face masks (HS 63) rose markedly, as also of certain other items as we shall see later. Further, investors looking for secure assets drove gold prices high and imports of HS 71 items into the US during the year surged by over 80%. Fifth, there was depressed demand in the US for certain consumer and industrial items, as in respect of apparel. Imports of energy and fuel items under HS 27 also declined by over 38% in value and of automotive products (HS 87) by 17.7%. Sixth, the tariffs imposed by the US on steel and aluminium imports on security grounds under Section 232 of the US Trade Act since March 2018 continued to have an impact.

In this report, we shall try and examine which of these factors may have acted more dominantly in respect of India’s exports to the US in 2020. To keep our analysis from getting too unwieldy, we have taken into account only those HS 2 digit chapters in which India’s annual exports to the US exceeded US$ 500 mn in recent years, or those in which India’s exports to the US under the GSP scheme exceeded US$ 100 mn in 2017 and 2018. Together, these number 21 HS chapters, which we can regard as sectors with considerable export strength for India in the US market. These chapters accounted for over 85% of imports from India into the US in 2020.  We shall further aggregate these chapters under three broad heads which shared some trade trends[1].
[1] We shall be using mainly US import statistics as the source since it allows comparisons with India’s competitors in the US market. US also publishes trade figures for GSP utilisation.
View Download