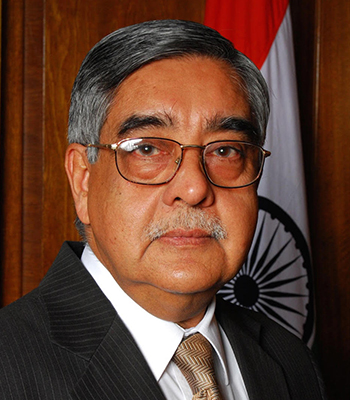 Ambassador Nalin Surie has served over a long and distinguished career in the Indian Foreign Service from 1973-2011, holding a number of strategic, policy and advisory roles, including as the High Commissioner to the United Kingdom and Ambassador to China and Poland. More recently, he has also led the Indian Council of World Affairs, as the Director General from 2015-2018, bringing together his extensive experience in economic, geo-political and defence/security issues with a research-led focus.

Having trained as an economist and completed his Masters from the Delhi School of Economics in 1972, Nalin Surie joined the Indian Foreign Service in July 1973.

He subsequently served in Indian missions in Hong Kong: China watching, political & cultural affairs; Brussels: trade policy with the then EEC; Dar-es-Salaam: developmental and regional issues; Thimphu: bilateral & strategic partnership implementation; New York: as Deputy Permanent Representative at India’s mission to the UN, before his Ambassadorships in Poland and China. His final international assignment was as High Commissioner to the United Kingdom.

At headquarters, in the Ministry of External Affairs, his assignments have included Head of Eastern Europe division at the end of the Cold War and during the breakup of the Soviet Union, Head of East Asia division during the emergence of China on the global stage and Secretary (West) where he led intensive efforts to develop the multidimensional partnerships with EU, Canada, Africa and Latin America.

Ambassador Nalin Surie has extensive cross-sectoral experience on issues ranging across the substance of India’s foreign and security policies. During his career he also focused on India’s external economic relations and the international economy.
Past publication not found...