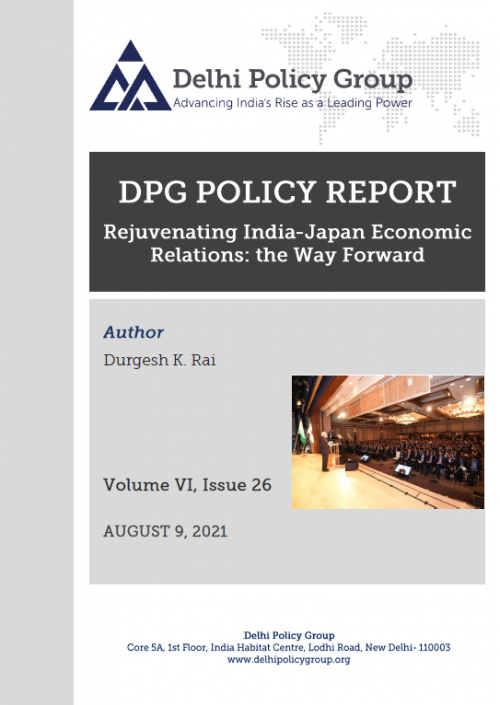 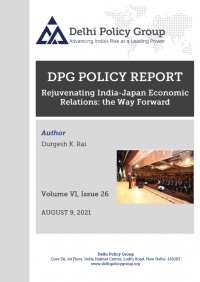 Date: August 09, 2021
By
The economic and demographic profiles make the economic interests of India and Japan highly complementary with enormous potential to drive trade and investment relations between the two economies. The changing world economic order gives strategic dimension to the bilateral relations. With a clear realisation about the potential of bilateral relations, the political engagement between India and Japan has seen continuous up-gradation since the early 2000s, moving from ‘Global Partnership’ in 2000 to ‘Strategic and Global Partnership’ in 2006 and further to ‘Special Strategic and Global Partnership’ in 2014. These engagements have also been complemented by a number of bilateral economic pacts including the India-Japan CEPA, which came into effect in 2011. This study analyses recent trends and patterns in India-Japan economic relations and examines the barriers, particularly NTMs that hinder the growth of Indian exports to Japan. It also looks at the key factors that constrain Japanese FDI flows to India.

The study shows that the two-way merchandise trade, particularly India’s export to Japan, has  witnessed considerable fluctuations during the last one decade with value of India’s export to Japan remaining almost same in 2019 at the level of 2010. India’s services exports to Japan, on the other hand, have seen some growth but remain substantially below potential. India has also gained significance as an investment destination for Japanese companies during 2010-19 but India’s share in Japan’s total outward FDI stock lags behind that of many of its competitor economies in Asia like China, Thailand and Indonesia. There exists considerable scope to enhance Japanese investment into India.

The study observes that although tariff is not a major concern for Indian exports, there has been some deterioration in Japan’s tariff regime in the recent past, which could be detrimental to the export of a significant number of tariff lines that are excluded from Japan’s tariff commitment under CEPA. Japan’s FTAs with some of India’s competitor economies are a disadvantage in a few sectors of export interest to India. The study suggests that these issues should be taken up during the proposed review of the CEPA, but only after doing proper ground work.

The most challenging task for Indian exporters is to deal with the high incidence of NTMs in Japan. However, given that most NTMs are put in place with the stated objective of human safety and health, it is extremely difficult to ask for any compromise from the Japanese side. Therefore, the focus should be on enhancing co-operation with concerned Japanese agencies within the framework of the CEPA and, more importantly, empowering our export industry to follow prescribed quality standards.

Key factors that limit FDI flows to India in general and from Japan in particular include trade facilitation, poor infrastructure, issues related to customs, poor logistics, etc. To stimulate Japanese FDI, the government has to continue its efforts to further improve all the ease of doing business parameters but with focus on enforcing contracts, registering property, starting a business and paying taxes in the country. Improved logistics; a more open, stable and consistent trade policy regime, and the establishment of a ‘centralised single window clearance system’ will increase India’s attractiveness for Japanese investors.

Overall, India-Japan economic relation is still not in a self-driving mode and the governments of both countries need to further enhance their facilitating role to realise the full potential of bilateral economic engagements between Asia’s 3rd and 2nd largest economies.
View Download