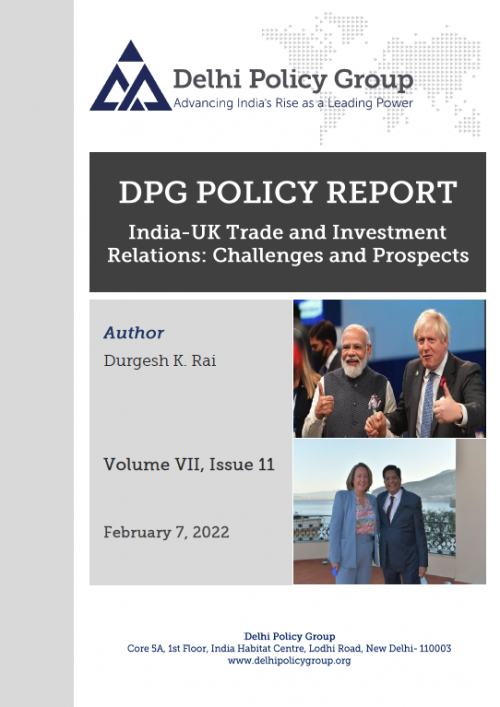 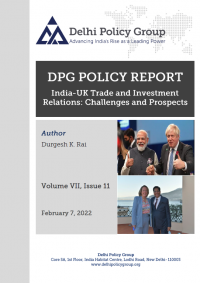 India and the UK share a strong and multi-dimensional strategic partnership. Following India’s economic reforms in the early 1990s that placed the Indian economy on a high growth trajectory, the two countries have taken several initiatives to expand bilateral relations. To advance trade and investment relations, they have formally launched negotiations for a free trade agreement (FTA) on January 13, 2022 and the first round of talks have been concluded on January 28, 2022.

The present study aims to review and analyse trade and investment flows of and between India and the UK, and examine the barriers that hinder the realisation of the full potential of India-UK economic ties. The findings of the study also highlight the major areas that require focus and the barriers that need to be removed under the proposed FTA.

During 2000-2019, India’s GDP grew at a CAGR of 6.6 per cent compared to the UK’s 1.7 per cent, and it emerged as the fifth largest economy in the world in 2019 ahead of the UK. However, the UK remains a significantly larger player than India in global trade of both goods and services. In 2019, while the UK was the fourth largest trader of goods and services globally, India was ranked 12th. This also indicates the UK’s higher dependence on international trade and hence its greater desire to secure market access in foreign countries. At the same time, the UK’s share in world trade has declined over the last two decades while India’s has increased. The UK’s share in global exports declined from 5.3 per cent in 2000 to 3.3 per cent in 2019, while that of India increased from 0.8 per cent to 2.1 per cent during the same period.

Despite an increase in the share of services in external trade for both India and the UK, goods trade is still more important than services, more so for India. In 2019, the share of goods in India’s total exports and imports was around 60 per cent and 73 per cent, respectively. In the case of the UK, goods constituted around 53 per cent and 71 per cent of total exports and imports respectively. Therefore, both countries have interests in both goods and services trade. There has also been a surge in the merchandise exports and imports of both over the last two decades, but India’s growth rates have been substantially higher than the UK’s. However, there was a slowdown in exports and imports during 2010-2019 as compared to 2000-2010 for both economies, as well as greater fluctuations in their global trade. Overall, the last decade appears to have been more challenging in terms of international trade for both countries.

Analysis of trade composition indicates complementarity in the trade structures of the two economies. Seven of the UK’s top ten import sectors are the same as India’s leading export sectors. The RCA analysis shows that while India has a comparative advantage in 40 sectors, the UK’s comparative advantage lies in 23 sectors. As expected, almost half the sectors in which India has a comparative advantage belong to two major labour intensive sectors – agriculture, and textile and clothing. The UK’s comparative advantage lies mainly in non-agricultural capital and technology intensive sectors. The UK and India have a comparative advantage and competitive interests in sectors like pearls, precious stones, metals, coins; organic chemicals; and pharmaceutical products. Consequently, negotiations of the proposed FTA in the case of these sectors are likely to involve considerable give and take. However, they also present an opportunity for closer bilateral co-operation, as reflected in the tie-up between the UK’s AstraZeneca and the Serum Institute of India for the production of the Covid-19 vaccine.

The study finds that India-UK bilateral merchandise trade almost trebled from US$ 5.4 billion in 2000 to US$ 15.7 billion in 2019. However, Indian exports to the UK have grown faster than its imports from the UK, turning the trade balance in India’s favour since 2004. As in the case of global trade, two-way trade in the 2010s has increased slower than in the 2000s. The share of the UK in India’s external trade has declined significantly because the growth in bilateral trade has been slower than the growth in India’s trade with the rest of the world. The share of the UK in India’s global trade has declined from 5.6 per cent in 2000 to less than two per cent in 2019. The UK’s share has declined both in India’s exports and imports, but the decline in the share of imports has been relatively sharper than that in exports.

India’s exports to the UK are more diversified, ranging from labour intensive agriculture and textiles and clothing to international production network-intensive machinery and high value optical and medical goods. India’s imports from the UK, on the other hand, consist mainly of manufactured goods, which are capital and technology intensive. This indicates that while negotiating the FTA with the UK, India will have to focus not only on products from traditional sectors like agriculture, and textiles and clothing but also on high value manufacturing sectors that are emerging as key contributors to Indian exports.

Tariff and non-tariff barriers exist in both countries. While the UK’s exports face high tariff barriers, India’s exports suffer due to the high prevalence of NTMs in the UK. Besides, Indian exports from some key labour intensive sectors are disadvantaged vis-à-vis competitor economies like Bangladesh due to the UK’s GSP scheme. India could focus on these products during negotiations on the proposed early harvest deal. Negotiating tariff barriers is relatively easy, but the adverse impact of NTMs on trade can be addressed only through active co-operation between the concerned agencies of the two countries. India, therefore, needs to press for institutionalised mechanisms under the proposed FTA to tackle the problems arising out of the higher prevalence of NTMs in the UK. To make these mechanisms more effective, it is important to have provisions under the FTA for timely resolution of issues related to NTMs, at least in some critical sectors like chemicals, pharmaceuticals, automotives and engineering.

The study also shows that services have gained importance in the external trade of both countries over the last two decades. While the share of services in India’s total exports increased from about 29 per cent in 2000 to 40 per cent in 2019, the UK’s share increased from 26 per cent to 46 per cent. Although the UK remains a bigger player in international services trade than India, India’s share in the global trade of services has increased while that of the UK has declined in the recent past. In 2019, India was the world’s 8th largest exporter and 10th major importer of commercial services. The UK was ranked the second leading exporter and fifth largest importer globally in the same year.

Despite fluctuations, India-UK bilateral trade in services has increased from about US$9 billion in 2010 to more than US$13 billion in 2019. Although the UK’s imports from India have grown slightly slower than the UK’s exports to India, the services trade balance remains in India’s favour. Between 2010 and 2019, the importance of the two countries in each other’s services trade has declined. Detailed examination of the composition of trade and RCA analysis have shown that India has offensive interests in ‘telecom, computer and information services’ and ‘other business services’. For the UK, areas of interest include personal, cultural and recreational services; financial services; other business services; insurance and pension services; and charges for the use of intellectual property. With the growing presence of the Indian diaspora in the UK ‘personal, cultural and recreational services’ could also be an area of interest for India as well. This sector offers significant scope for bilateral co-operation.

The study highlights several issues that impede the flow of bilateral services trade. India should focus on time bound provisions on MRQs and SSA along with concessions on labour-market tests and stringency in visa regulations under the proposed FTA. Besides, given that the UK is a major IT-ITeS services market for India and any restriction on flow of data across borders is likely to undermine the realisation of the potential in bilateral trade, it is imperative to have data adequacy provisions as part of the India-UK FTA.

While the UK has been an important source of FDI for India, India’s importance has also been growing as a source of FDI for the UK. The UK was the 6th largest investor in terms of total accumulated FDI equity flows into India from April 2000 to March 2021. India has emerged as an important source of FDI for the UK. The study finds that the composition of the UK’s FDI to India is in sync with India’s aim of augmenting its manufacturing capacity and raising the share of manufacturing in GDP to 25 per cent. The data analysis shows that of the top five sectors that received maximum FDI from the UK, four belong to manufacturing, including food processing, which is vital to enhance farmers’ incomes in the country. However, the study also highlights a number of investment barriers, particularly in India, that hamper investment flows to India from the UK (and the rest of the world). Given that the UK is a very significant source of FDI, India should focus on the challenges that global investors in general and UK investors in particular face while entering the Indian market and address these constraints.

Overall, despite having a very complementary and robust economic partnership, several barriers still impede flows of trade and investment between India and the UK. The proposed FTA provides a much-desired opportunity to remove those barriers and to realise the full potential of bilateral relations between the world’s fifth and sixth largest economies.