The COVID-19 pandemic has resulted in lockdowns and a severe disruption of economic activity across the world. On April 14, 2020, the IMF projected that the world economy is expected to contract by 3% in 2020, experiencing its worst recession since the Great Depression[i]. It has also cautioned that while provisioning of broad-based fiscal stimulus can avert an even deeper downturn, “it is most likely to be effective once the outbreak fades”[ii]. The current global economic crisis is qualitatively different from the 2008 financial crisis, as it is the consequence of a non-economic variable, the COVID-19 pandemic.

The lesson from the 2008 economic crisis was that large stimulus packages tend to work if they are implemented with precision and timely interventions.[iii] Today, in order to beat the coming recession, most countries have turned to Keynes’ prescription of infusing purchasing power among people and boosting employment through monetary and fiscal policies. Almost all major economies have resorted to stimulus packages to address the economic distress caused by the pandemic. In the last week of March, Germany announced a stimulus package of about $ 810 billion[iv] and the United States announced the largest ever stimulus package in its history, amounting to almost $ 2 trillion.[v]  On April 6, 2020 Japan’s Prime Minister Shinzo Abe announced a big-bang stimulus package amounting to 108 trillion yen ($992 billion), equivalent to 20 percent of the country’s GDP[vi] (see Annexure).

For a few weeks, despite the looming threat of the pandemic, the Abe administration was reluctant to impose a State of Emergency. Such reticence stemmed from painful historical memories of an excessively powerful State prior to the Second World War.[vii] The fact that a monetary/fiscal stimulus package was announced simultaneously with the Declaration of a partial State of Emergency in some prefectures indicates that considerable preparation went into the whole exercise. It suggests that the Japanese government was keen on addressing the concerns of families and small businesses on the economic challenges that may arise due to the emergency measures aimed at containing the spread of the pandemic. PM Shinzo Abe did not impose complete lockdown; instead, he called on the people to reduce human-to-human interactions by 70 to 80 percent.  PM Abe noted that Japan is confronted with the “greatest crisis of the post-war period” and his government would attempt to overcome this “together with the people by mobilizing all other conceivable policy instruments.”[viii]

The stimulus package has been welcomed by the public, as it will provide direct cash payments targeting various vulnerable sections. Households in which the head of the family’s income fell by at least half (from February to June) can submit necessary documentation on lost income to the local municipal governments in order to receive the direct cash transfer.[ix] Interestingly, private financial institutions will also provide five-year interest free loans for small business.[x] The package is to be implemented in two phases viz., (i) emergency measures to combat the pandemic such as increasing the stockpile of Avigan medicine as well as refurbishing Olympic stadiums to meet hospitalization needs and support families; and (ii) long-term economic measures, once the virus is contained, to ensure a “V-shaped” economic recovery such as “discount vouchers to revive tourism, transport, food services and event business sectors.”[xi] 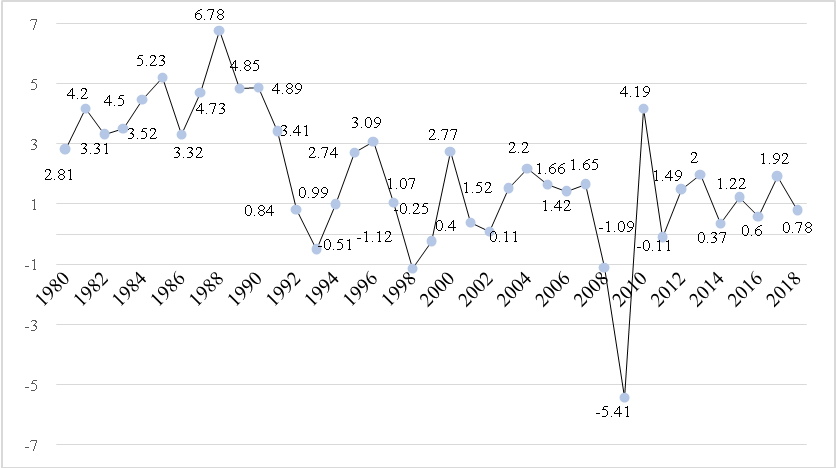 For Japan, the current economic stimulus which was induced by a pandemic, has come in the midst of structural reforms that Prime Minister Shinzo Abe initiated several years ago. When Prime Minister Abe came to power in 2012, the Japanese economy was experiencing a deflationary economic crisis. To address this challenge, Abe introduced his “three-arrows” approach to reviving the economy – flexible fiscal policy, aggressive monetary policy and structural reform – which has come to be known as “Abenomics”[xii] The fiscal policy targeted the development of critical infrastructure; the monetary policy’s objective was to enhance liquidity in the economy; and structural reform sought to increase Japan’s competitiveness by various measures, such as cutting business regulations and increasing workforce diversity.[xiii] Abenomics has resulted in significant government spending to ensure that the economy achieves higher levels of growth[xiv]  and has yielded some positive outcomes. In 2018, government data indicated that economic growth between 2012 and 2017 constituted the second most prolonged growth streak since the Second World War.[xv] Compared to 2012, the unemployment rate went down by about 2.4 percent, corporate pre-tax profit reached 42.1 JPY tn ($385 bn) and the number of women in the workforce increased.[xvi]
An important challenge confronting Abenomics was the need to address deficits. Instead of cutting government spending, Abe’s government sought to address this need through an increase in taxes. In 2014, the Abe government increased the consumption tax to 8% and the economy shrank by 7.3%.[xvii] In October 2019, the consumption tax was further increased to 10%[xviii]. Abe justified these tax increases as necessary for “all-generation” social welfare policies, such as the need to meet the requirements of an ageing society as well as contributing towards free education for young children.[xix]  Learning from past experience, important household items such as groceries, takeout meals, and daily newspapers were exempted and incentives were provided for the purchase of cars and houses.[xx]  However, the government’s assumption that the negative impact of increased taxation on the economy could be abated through these incentives did not yield the anticipated results. Further, a global downturn and a powerful typhoon altered the economic calculus.[xxi]  As a consequence, the economy shrank by 6.3% in the last quarter of 2019.[xxii]

While many in Japan were agitated with the impact of the increased consumption tax on immediate economic growth, the International Monetary Fund (IMF) observed that the “consumption tax rate would need to increase gradually to 15 percent by 2030 and to 20 percent by 2050” in order to meet the costs of an ageing society.[xxiii]  All this implies that the Japanese government needs to increase spending, plan for an ageing population, keep the interest rates low to provide enhanced liquidity to the economy and simultaneously ensure that the deficits and debt do not overwhelm the economic system.

Thus, Abe’s current economic stimulus comes amidst a challenging economic environment and an important casualty has been the need to address the debt burden. Currently, government debt as a share of Japan’s GDP is around 237.6%, which is high compared to other industrialised countries, such as the US (108%) and Germany (55.7%).[xxiv]  Instead of reducing debt, the Japanese government is scaling up its debt burden to pay for the fresh stimulus. According to various reports, the government plans to raise more debt by an increase in bond sales to almost 147 trillion yen ($1.35 trillion), or 30% of the size of Japan's economy, to pay for the stimulus.[xxv]” There are thus concerns that the economic stimulus will further increase the debt burden, making it difficult to meet the needs of a society with an ageing population. On the other hand, much of the debt is predominantly funded by domestic capital with low interest rates.[xxvi]  However, Japan needs to achieve higher growth rates and requires a favourable global economy in order to reduce deficits and avoid recourse to foreign capital.[xxvii]

The Abe government’s stimulus package has received considerable domestic approbation. However, at the international level, countries such as Germany and South Korea have expressed apprehension, stating that Tokyo’s stimulus will weaken the Japanese currency considerably, thereby making its exports globally more competitive.[xxviii] Further, the Japanese government’s reported decision to allocate “220 billion yen ($2 billion) for companies shifting production back to Japan and 23.5 billion yen for those seeking to move production to other countries” has drawn considerable attention. While this provision does not specifically mention China, some analysts are interpreting the additional support to promote domestic supply chains as a move targeting Beijing. Compared to the scale of Japanese investments in China, the allocation of $2 billion amounts to a meagre sum.[xxix] Nonetheless, this policy measure sends a clear message to Japanese companies on the need to diversify overseas investment patterns. If other countries also adopt similar measures, we may gradually see a significant shift in global supply chains.

There has been some criticism that Japanese government delayed closing doors on Chinese tourists because of a much anticipated summit meeting between Shinzo Abe and Xi Jinping.[xxx]  On the other hand, it is being argued that the delay in declaring the state of emergency in worst affected areas has stemmed from confidence that Japan may not see a spike in infections due to inherent societal advantages such as “a culture where handshakes and hugs are less common.[xxxi]” However, these partial measures have proved inadequate and Prime Minister Abe has finally had to declare nation-wide state of emergency on April 16, 2020 following considerable criticism that attempts to keep much of the economy running have come at the expense of public health, with steadily increasing coronavirus infections. Abe has also announced that fresh legislation is planned to provide Yen 100,000 ($ 930) in cash to every person in Japan to counter the economic impact of the emergency, which go beyond the earlier more conditional plans for payouts to affected households alone.

Japan’s recent experience suggests the need for decisive political leadership at multiple levels with well-coordinated interventions to address public anxiety about economic hardships during a pandemic. This was evident in the announcement of the stimulus package and now its likely expansion. Further, the economic stimulus packages implemented by various developed countries indicate that the State has regained a preeminent position in rearranging and reviving economic activity. Today, even the most ardent supporters of the free market economy recognise the important role of the state apparatus in addressing the onset of an unprecedented economic recession. Compared with the 2008 experience, the concept of direct-cash-transfers has acquired greater salience in the stimulus measures for two reasons: first, with the spread of social media, small businesses and lower-middle classes have become powerful constituencies demanding special attention in times of economic crisis; second, the improvement in digital technologies has provided governments with new tools to reach beneficiaries directly with greater efficiency. We will never know if Keynes would have approved of governments putting cash in the hands of people to increase purchasing power. However, the efficacy of direct-cash-transfers during a recession will become evident very soon. Eventually, the comparative success or failure of stimulus packages will also determine the balance-of-power dynamics in the international order.
***

Annexure
Source: “Overview of the Supplementary Budget for FY2020 April 7, 2020),” Ministry of Finance, Government of Japan, available at https://www.mof.go.jp/english/budget/budget/fy2020/02.pdf

[vi]Prime Minister of Japan and His Cabinet (2020), [COVID-19] Press Conference by the Prime Minister Regarding the Declaration of a State of Emergency. Retrieved From: https://japan.kantei.go.jp/98_abe/statement/202004/_00001.html

[xxii]The Economist (2020), Japan’s GDP shrinks dramatically after a tax rise and a typhoon. Retrieved from: https://www.economist.com/asia/2020/02/20/japans-gdp-shrinks-dramatically-after-a-tax-rise-and-a-typhoon