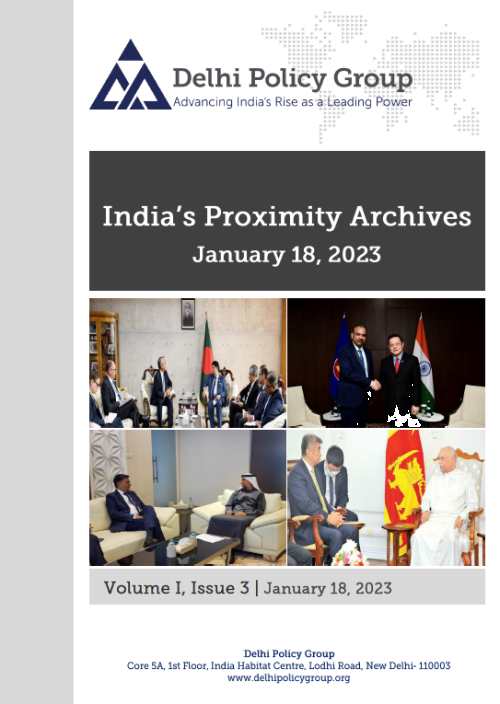 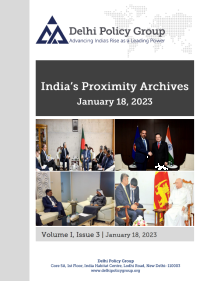 by Shreyas Deshmukh
Prime Minister of Pakistan Shahbaz Sharif, in a TV interview during his visit to UAE on January 16, called for an “honest talk with (Indian) Prime Minister Narendra Modi on various burning (bilateral) issues”. Subsequently, he resorted to the usual rhetoric over Jammu and Kashmir. The UNSC designated Abdul Rehman Makki, the Deputy Chief of Lashkar-e-Tayyaba, as a global terrorist. In June 2022, China had put a hold on this listing but this time withdrew its objection.

Fear of economic default continues to loom over Pakistan even after backing from Saudi Arabia and UAE (USD 4 billion). This week thousands of containers were held up at Karachi Port due to depleted foreign currency reserves as banks refused to issue new letters of credit for importers.

Mursal Nabizada, a former Afghan MP was killed at her home in Kabul on January 15. It is the first time a lawmaker from the previous administration has been killed in the city since the takeover. Earlier on January 11, five people were killed by a suicide bomber near the Afghan Foreign Ministry in Kabul, where a Chinese delegation was due to visit.

Bangladesh expanding relationship with Indo-Pacific countries. The US Assistant Secretary for South and Central Asia Donald Lu visited Dhaka on January 14-15. The US sanctions on the Rapid Action Battalion of Bangladesh, GSP Status, defence cooperation, and Rohingya influx were some of the issues discussed during his visit. In a conference on January 14, the Foreign Minister of Bangladesh Dr. AK Abdul Momen said that his country is now ready to take the bilateral relationship with Japan to a level of ‘Strategic Partnership'. Meanwhile, Indian Coast Guard ships ICGS Shaurya And ICGS Rajveer, visited Chattogram, Bangladesh from January 13-18.

India has informed the IMF that it will support Sri Lanka's debt restructuring plan. Sri Lanka is expecting USD 2.9 billion bailout package from the IMF. Further, to overcome the economic crisis Sri Lankan State Minister Premitha Bandara Tennakoon announced reducing the size of the Sri Lankan Armed Forces from the current strength of 200,783 to 135,000 by 2024, and by 2030 it will be reduced to 100,000.

Other Developments
The 10th meeting of the BIMSTEC Joint Working Group on Counter Terrorism and Transnational Crime (JWG-CTTC), was held on January 12, 2023, in New Delhi.
68 passengers died in a plane crash in Pokhara, Nepal on January 15, 2023.
Sri Lankan President Ranil Wickremesinghe said that government will fully implement the 13th Amendment.

by Anshita Shukla
The new Secretary-General of ASEAN convened a meeting of the Committee of Permanent Representatives (CPR) to ASEAN on January 16, 2023. Ambassador Derry Aman, Permanent Representative of Indonesia to ASEAN, underscored the importance of ASEAN centrality for maintaining the bloc’s strategic importance in the region and the world, as reflected by this year’s theme – “ASEAN Matters: Epicentrum of Growth”. He further highlighted Indonesia’s priorities as this year’s ASEAN Chair on “food security, energy security, global health architecture, financial stability, and mainstreaming the ASEAN Outlook on the Indo-Pacific".

On January 12, the Ambassador of India to ASEAN, Jayant N. Khobragade paid a courtesy call to the new Secretary-General of ASEAN, Dr. Kao Kim Hourn at the ASEAN Secretariat.

As the upcoming chair of ASEAN, Indonesia is establishing a special envoy’s office to coordinate ASEAN efforts in managing the Myanmar crisis to be spearheaded by Retno Marsudi, Indonesia’s foreign minister. On January 11, the foreign minister stated the country’s commitment as the chair towards disallowing the Myanmar crisis to inhibit ASEAN cooperation. This comes at the same time as rights activists in Indonesia demand the country to highlight the crisis of Rohingya refugees in ASEAN.

This week Indonesian Ocean Justice Initiative reported that CCG 5901, the Chinese coastguard’s leading ship had been sailing in Indonesia’s Exclusive Economic Zone (EEZ) in the Natuna Sea, near the Tuna Bloc gas field and the Vietnamese Chim Sao oil and gas field, since December 30. This comes weeks after Indonesia and SKK Migas, the country’s oil and gas regulator, approved the first phase of development of the Tuna offshore gas field in the South China Sea. The chief of the Indonesian navy has reported that the country has deployed a warship, maritime patrol plane and drone to monitor the Chinese vessel.

by Sanket Joshi
India’s External Affairs Minister Dr. S. Jaishankar congratulated UAE’s Minister of Industry and Advanced Technology, Dr. Sultan Ahmed Al Jaber, for being named as President-Designate for the 28th Conference of Parties (COP) to the United Nations Framework Convention on Climate Change (UNFCCC). Meanwhile, India and the UAE are reportedly close to a “major agreement” on a renewable energy grid. The two countries also signed an MoU for Green Hydrogen development and investment.

UAE’s Foreign Minister Sheikh Abdullah bin Zayed Al Nahyan while addressing “Voice of the Global South Summit” commanded India’s inclusive approach in its G20 Presidency and called upon COP28 and G20 to work together for humanity.

Ahead of Egyptian President Abdel Fattah El-Sisi’s visit to India as the Chief Guest at Republic Day 2023, Egypt’s Ambassador in New Delhi highlighted President Sisi’s visit as a golden opportunity for the two countries to forge a “strategic partnership” based on “common interests and shared priorities”. As part of India’s G20 Presidency, India and Egypt will join hands to be a voice of the Global South.

Iran executed its former Deputy Defence Minister and British-Iranian dual citizen, Alireza Akbari, who was reportedly convicted of spying for the UK. British Prime Minister, Rishi Sunak, condemned the Iranian regime’s “callous and cowardly act” highlighting the “barbaric nature of the regime that has no respect for the human rights of its people”.

US Defence Secretary Austin reiterated Washington’s “firm support” to Israel based on a “shared commitment to democracy, freedom, and the rule of law”. Meanwhile, Iraq’s Prime Minister Mohammed Shia al-Sudani defended the continued presence of US troops in his country for the elimination of ISIS.

by Angana Guha Roy
Amidst debate over the impact of easing China’s zero Covid policy, China's economy slowed sharply in the fourth quarter due to stringent COVID curbs, dragging down economic growth to merely 3%,  the worst growth figures since a 1.6 contraction in 1976.

Weeks after China’s high altitude clash with   India  in the eastern sector of LAC, China denounced  US assistant secretary of state for South and Central Asian affairs Donald Liu's latest statement  criticizing China's aggressive moves along  LAC . In a statement  Chinese embassy stressed "Chinese side is firmly opposed to such acts that a third country point fingers at the bilateral issue between other two countries out of geopolitical consideration.”

China’s proposed 60,000 MW  hydropower project in Arunachal Pradesh’s Upper Siang district  has raised concerns (a) it can  reduce the natural flow of water from the Brahmaputra away from India during lean patches (b)  it can  be used to trigger “artificial floods” .  The Brahmaputra accounts for nearly 30% of freshwater resources and 40% of India’s hydropower potential. Diverting its flow might impact the agricultural sector in Assam and Arunachal Pradesh.

China has opposed a suggested visit by Tibetan spiritual leader the Dalai Lama to Sri Lanka. Charged d'affaires Hu Wei stated that Dalai Lama "has long been engaging in anti-China separatist activities and attempting to split Tibet from China"

In the wake of rising concerns about the role of China in Sri Lanka’s debt restructuring, Chen Zhou who is leading a visiting high level delegation of China’s Communist Party (CPC) to Sri Lanka said: “Several Ministries and financial institutes of China are working closely on this issue for quite a long period. I’m confident that Sri Lanka will have good news very soon.”Sri Lanka is relying on $2.9 billion bridge loan from the International Monetary Fund (IMF) that is expected to relieve country’s crisis hit economy.

Meanwhile reports have surfaced that Sri Lanka’s Tamil and Muslim communities are concerned about the recent increase in visits of Chinese Embassy officials to Sri Lanka’s Northern and Eastern provinces due to security reasons. People have also expressed concern about the distribution of Chinese-produced rice as it is reported to cause food poisoning and ill health.

With India getting 14 out of 15 members of the UN Security Council on its side, on January 16 China gave up a  technical hold it had placed last year  on the designation of Lahore-based Lashkar-e-Toiba’s deputy chief Abdul Rehman Makki as a global terrorist by the 1267 UN Sanctions committee. In June 2022, China blocked a joint proposal from the US and India to have Makki included on the UNSC’s list of global terrorists. India criticised Beijing’s action, calling it “extremely unfortunate.”

Other Developments
The Problem(s) With China’s Population Drop
WHO welcomes data on COVID-19 in China, meeting with Minister
View Download