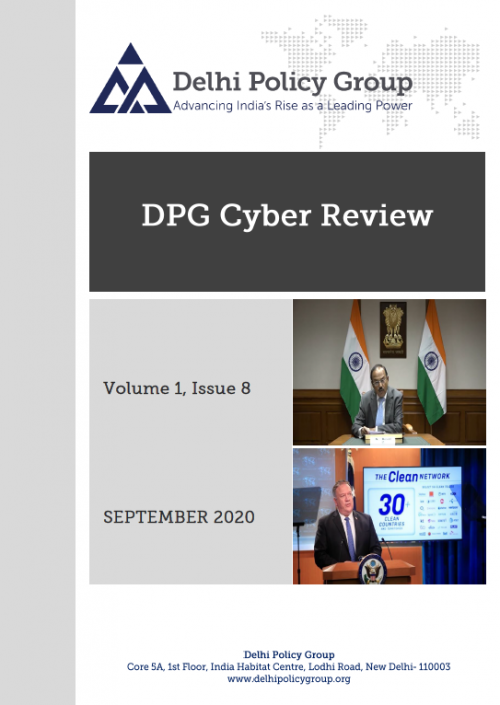 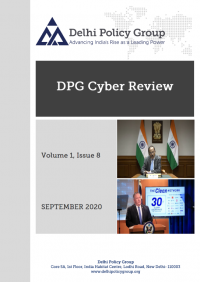 Date: October 03, 2020
By Brig. Abhimanyu Ghosh (Retd.)
September 2020 started with the banning of an additional 118 Chinese apps by the Indian Government, bringing the total to 177, on grounds of national security. The decision was vindicated when the media reported, a few days later, that a Chinese tech company had monitored personal data of more than 10,000 Indian organisations and individuals, including political leaders and bureaucrats. Cyber-attacks were also reported from Chinese state sponsored hackers on Indian companies and Government networks. The US based China Aerospace Studies Institute (CASI) reported that China had carried out cyber-attacks on Indian satellite communications. However, the Indian Space Research Organisation (ISRO) maintained that its systems have not been compromised.

A draft cabinet note (DCN) on implementation of a national strategy on AI is under preparation. A report by the International Data Corporation (IDC) has predicted that India's Artificial Intelligence (AI) spending will grow from $300.7 million in 2019 to $880.5 million in 2023, at a compound annual growth rate (CAGR) of 30.8 per cent. The Indian Government is preparing to release a National Cyber-Security Strategy 2020 (NCSS 2020) which envisions a safe, secure, trusted, resilient and vibrant cyberspace for India's prosperity. The long awaited Personal Data Protection Bill (PDPB-2019) is likely to be placed before the Indian Parliament during its winter session.

In the global cyber space, a number of cyber attacks were reported. The month of September began with the hacking of the internal email system of the Norwegian parliament (Stortinget), while the month ended with a massive ransomware attack on more than 250 hospitals across the US. Tech companies are taking punitive actions against malign actors. Facebook removed three separate disinformation networks that targeted countries over geo-political issues.

Amidst the China-US tech war, both governments are taking proactive measures. The US State Department has announced a “Clean Network” Program, to rid the United States of Chinese technology and decouple the two economies in this sensitive sector.  On September 4, President Donald Trump issued Space Policy Directive-5 on Cybersecurity Principles for Space Systems (SPD-5), the “nation’s first comprehensive cybersecurity policy for space systems”. The US imposed restrictions on exports to Semiconductor Manufacturing International Corporation (SMIC) of China. SMIC becomes the second leading Chinese technology company to face U.S. trade curbs after Huawei Technologies.

China announced a “Global Initiative on Data Security” to set global standards on data security, as a counter to these US initiatives.

The Pentagon is considering a program that would share its under-used military spectrum with private businesses, to spur innovation and counter Chinese domination of 5G devices and network equipment. The Pentagon is also stepping up military use of AI, in coordination with democratic allies.

China tested a prototype of the AR-500C unmanned aerial vehicle (UAV), a high-altitude drone helicopter, designed for missions on the country’s disputed LAC with India.

September 2020 saw India entering into several agreements for Bilateral and Minilateral cooperation on Cyber security and digital technology innovation. Start-ups of India and Israel initiated a bilateral program to accelerate innovation and technology cooperation. India and Japan are joining hands in the technical development of 5G and 5G plus technologies with the help of other ‘Quad’ strategic dialogue partners. Officials of the four countries discussed the issue at a virtual meeting of the 'Quad' on September 25, 2020. Simultaneously, India, Israel, and the US have begun trilateral cooperation on digital leadership and innovation so that the three countries play a key role in delivering the next-generation 5G technology.

At the G-20 Trade and Investment Ministers' meet on September 22, India clarified that it is not in a position to accept uninhibited cross-border data flows.
View Download