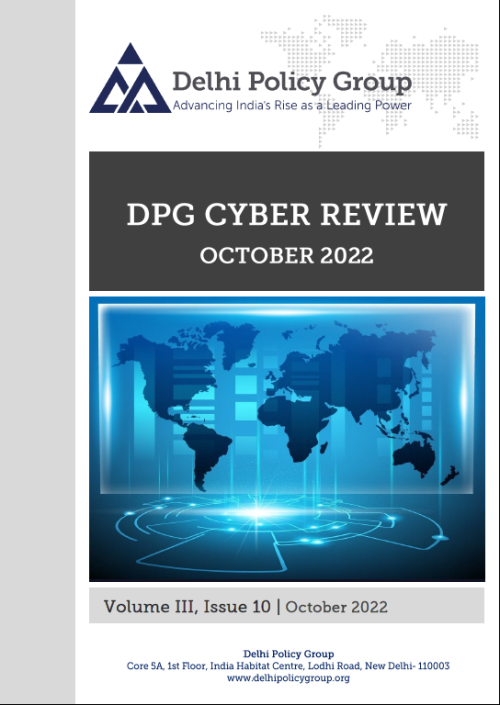 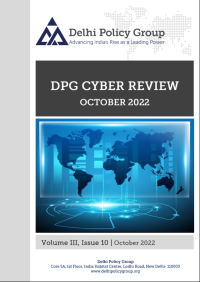 Date: November 03, 2022
By Brig. Abhimanyu Ghosh (Retd.)
Pakistan has set up a clandestine Cyber-Army with help from Turkey, for working against perceived influence operations pursued by the US, India, and other foreign powers. Approximately 6,000 Pakistani police officers have been trained since 2018, to shape public opinion for domestic political goals and influence the views of Muslims in Southeast Asia.

Tata Power suffered a ransomware attack, on its IT infrastructure and some of its IT systems were impacted. The Central Bureau of Investigation (CBI) launched “Operation Chakra” at 115 locations, in coordination with Interpol, FBI, Royal Canadian Mounted Police, Australian Federal Police, with assistance from multiple state police, against international cyber-criminal gangs involved in financial crimes.

5G rollout in India has been delayed for want of over-the-air (OTA) software update on mobiles to connect to high speed 5G network. The Government and stake holders including telecom operators and handset makers are interacting to resolve teething issues for expediting the roll-out. Network equipment makers are also interacting with telecom operators to deploy 5G Radio Access Network (RAN) products and solutions. Competitions have intensified among satcom operators to enter India’s broadband-from-space services segment, which could be worth $13 billion by 2025. 36 broadband communication satellites of OneWeb were launched into orbit by ISRO, as part of its maiden commercial mission. One Web’s broadband-from-space services in India is likely to start in 2023. SpaceX has applied for the required licence for its Starlink network.

The Indian government intends to spend up to $ 1.3 billion to modernise and upgrade the Semi-conductor Laboratory (SCL) in Mohali, Punjab, that produces chips for strategic purposes.
The Government has notified further reforms in tele-communications (Wireless Licencing), satellite communication and has updated National Frequency Allocation Plan, to facilitate ease of doing business, and attracting investments.

On the international front, a hacktivists group “Black Reward”, supporting mass protests in Iran, following the death of Mahasa Amin in September, have stolen information from Iran’s Atomic Energy Organisation. The group has demanded the release of prisoners detained during the ongoing protests in exchange for the data.

The $44 Billion takeover of Twitter by Elon Musk is marked by swift changes with his characteristic imprint, that has caused a major upheaval in the international communities about the social media platform.

Tightening further regulations on China, the US administration announced a new export controls policy that restricts transactions involving technologies, expertise and materials for artificial intelligence, supercomputer, and semiconductor manufacturing, in its bid to slow Beijing's technological and military advances. US citizens including green card holders, are prohibited from supporting the development or production of advanced chips in China.

The US President released “The National Security Strategy-2022”, that lists the security concerns and challenges of the US and the plans to deal with them. The main thrust of the strategy is to compete with China and contain Russia, by investing in technologies at home, building a coalition of like-minded states, and modernizing its military. It aims to deter cyber-attacks from state and non-state actors by responding with all appropriate tools of national power and professes to promote adherence to the UN endorsed framework of responsible state behaviour in cyberspace.

The 90th General Assembly Meeting of the International criminal police organisation (INTERPOL), with 195 member countries, was hosted by India in New Delhi. The meeting discussed the importance of technology like artificial intelligence and the metaverse for agile policing to deal with the changes taking place in the global cyber threats landscape.
View Download