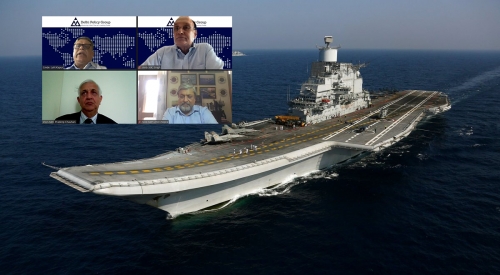 Panellists cautioned against reversion to sea blindness and supported a comprehensive approach to strategic thinking. They pointed to the interlinkages between the security of India’s maritime and continental domains and argued that India could no longer afford to focus predominantly on its border security without incurring severe strategic costs in its maritime space, which constituted its economic lifeline. While constraints to India’s power are largely continental, its breakout opportunities lie in maritime power which is absolutely vital for India’s development as a consequential regional power.

Speakers stressed the indivisibility of the oceans and reaffirmed the fact that the maritime dimension underpins the global order. They discussed India’s interests and challenges in relation to China’s vulnerabilities, particularly its maritime geography and dependence on the straits linking the Pacific and Indian Oceans. They argued that it would be prudent for Delhi to build capability to exploit such vulnerabilities in order to gain leverage on the continental front, including by developing power projection assets in the Andaman and Nicobar islands.

It was observed that while China constitutes a major security threat for India, Delhi also has numerous other maritime interests in the Indian Ocean. In the event of a confrontation, India will need the ability to use the seas for its own purpose while denying similar usage to adversaries. Speakers also explored the role of India’s ‘strategic partnerships’, arguing that France, the United States, Japan, Australia, Vietnam and Indonesia offered the best potential as India’s partners in the Indo-Pacific. They urged a proactive Indian role in taking forward Quad and Quad Plus cooperation and strongly supported Australia’s inclusion in the Malabar Exercise. To more effectively enhance interoperability with capable partners, they recommended consideration of more regular, mid-level, in theatre exercises. The need for India to pursue sustained investments in its maritime neighbourhood, such as in the Maldives, Sri Lanka and Bangladesh, was stressed.

On hard power accretion, speakers highlighted inconsistencies between PM Modi’s SAGAR vision and reported statements of India’s Chief of Defence Staff regarding naval capabilities, which indicated that the defence establishment did not appear to take SAGAR seriously. Setting aside the notion that a limited and submarine-centric force could help India dominate the Indian Ocean and preserve its vast maritime interests, speakers stressed the need to build broader and more balanced naval capability which included an array of platforms. This necessitated acquisition of sea-power in the classical sense, including in shipbuilding and expeditionary force capability. It was pointed out that just as continental forces must be structured to deal with all eventualities on land, the maritime “sword arm” must be structured to deal with all eventualities at sea.