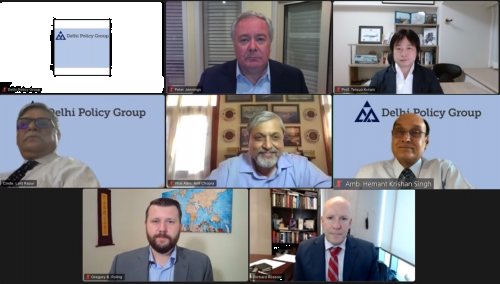 On September 20, 2021 the Delhi Policy Group hosted a webinar on “Realising the QUAD's Maritime Potential”. The event brought together strategists, academics, diplomatic officials and policymakers from India, Australia, Japan and the United States.

The panellists provided their perspectives on the Indo-Pacific visions of the four QUAD members and of South East Asia, as well as the commonalities that bind the Quad partners.  They broadly agreed that the Quad must leverage its  potential to moderate, dissuade and deter coercive activity from China across the spectrum of ideological, political, economic and military domains.  Delivering this potential will, however, require continued commitment towards shared objectives.  Expansion of the Quad should be considered only after the level of institutional engagement was sufficiently mature.

Regional developments, including the impact of US withdrawal from Afghanistan, the new AUKUS alliance and its impact on the region, the forthcoming QUAD Summit and prospects for a Code of Conduct in the South China Sea that was in consonance with UNCLOS were discussed.  There was consensus that a major task of the QUAD is to demonstrate to the region that alternatives exist to China and the partnership can deliver vitally needed public goods.  In this regard, the need to deliver on the vaccine partnership and other areas announced at the Quad virtual summit in March 2021 was highlighted.

The primary challenge that faces the Indo-Pacific is China’s increasingly belligerent behaviour that seeks to subvert international law and intimidate regional players. Exercise Malabar acts as a ‘Fleet-in-Being’, one that enables synergising of the QUAD’s collective military capabilities so that maritime forces can operate together when needed to counter both grey zone and high level coercion.