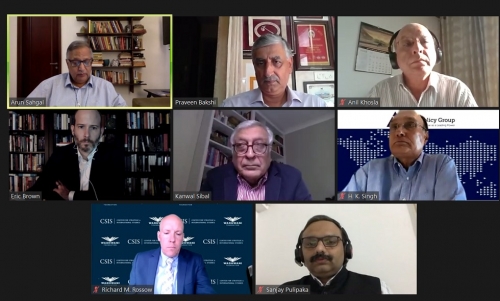 As the border impasse continues, there is a growing disconnect between the narratives of India and China. Beijing has continued to assert expansionist claims and change goal posts, with the language of its diplomacy characterised by arrogance and duplicity. A three-pronged strategy of physical consolidation over occupied Indian territory, influence operations and narrative control propaganda and attempts at psychological dominance through coercive intimidation, have defined China’s approach.

With this backdrop, the Delhi Policy Group organised a Webinar on the subject ‘Ladakh Standoff and India’s Policy Options’ on August 14, 2020. The discussion was moderated by Brig. Arun Sahgal and participants included Amb. H.K. Singh, Amb. Kanwal Sibal, Lt. Gen. Praveen Bakshi, Air Marshal Anil Khosla, Eric Brown (Hudson Institute, Washington D.C. ) and Richard Rossow (CSIS, Washington D.C.). Three issues were flagged for discussion: China’s posture and intentions, India’s response and political options and the role of external balancing, in particular the counterpoise that the India-U.S. strategic partnership and Quad/Quad Plus can provide. The following is a brief synopsis of the discussions at the Webinar.

The current standoff constitutes China’s largest military deployment on India’s borders since 1962. The nature and scale of operations indicate a pre-planned escalation over many months and validates the view that Beijing sees India as a long-term adversary. A comparison with earlier transgressions, including the Doklam crisis, indicates that the current deployment of over 40,000 Chinese troops along an extended front is qualitatively different. Even though the military asymmetry is in Beijing’s favour, PLA forces and their tactics are not intimidating for Delhi.

Having wrested strategic advantage, China is digging in for the winter and continues to build troops and equipment. The disengagement process has broken down and talks at diplomatic and military levels have stalled. As the situation stands, India will not compromise on anything short of a Chinese withdrawal to April 2020 positions. Delhi is looking at a prolonged standoff, which in all likelihood may extend into the winter and even beyond.

There is a perception that an extended standoff may advantage Beijing.  However, given that both forces are evenly matched, any Chinese attempts at gaining tactical advantage or further provocative actions could result in hostilities and escalation. India’s response need not be confined to sectors where the PLA is in an advantageous position. Instead, Delhi should identify areas which provide sufficient operational advantages and will hurt China the most, while also remaining prepared for escalation. The use of air power can provide credible deterrence, without being an escalatory measure. India has a relative advantage in the application of airpower over PLAAF, at least in the initial stages of a military conflict. There is also a need for operational synergies across the military spectrum, together with appropriate information management and a better communication strategy. Alongside deployments and ground actions, there is need for appropriate strategic signalling  by Delhi as a means of indicating Indian thresholds and consequences.

The restoration of a status quo ante will be difficult, as without tangible gains the entire Ladakh episode will be perceived as a futile exercise for China with serious political and military consequences for the CPC leadership. Forcing the PLA to de-induct in these circumstances is something that Delhi will need to think through carefully.

Chinese actions in Ladakh are linked to China’s strategic goals and economic ambitions in India’s immediate neighbourhood, as well as in other parts of Asia. Beijing’s economic engagements and extensive BRI projects have often created debt traps for recipients and dependencies on the Chinese economy. For many western countries, Beijing’s assertive posture has thus far have been a source of concern but was not seen as an immediate threat. However, post-COVID 19 Chinese assertions, wolf warrior diplomacy and shows of force have created a more challenging environment, necessitating more cohesive national and concerted responses. Moreover, the developments in Ladakh indicate China’s broader ambitions to alter the power dynamics in Asia, and thus constitute a litmus test for other big powers as well. For Delhi, the current crisis provides an opportunity to strengthen India’s bilateral and plurilateral partnerships with the US and other like minded powers.

A series of diplomatic initiatives and defence related options that India can exercise in response to the evolving security dynamics could include strengthening of the maritime component through more robust relationships, expansion of the Malabar Exercise to include Australia, renouncing the One China policy, upgradation of ties with Taiwan and being more proactive in calling out Chinese policies in Hong Kong as well as human rights abuses in Xinjiang. India should also stress the need for a political settlement in Tibet, in accordance with the will of the Tibetan people. Delhi needs to work more actively with select ASEAN countries, such as Vietnam and Indonesia. India must also scale up its Indo-Pacific activism by working through the Quad and Quad Plus plus mechanisms. The prospect of developing the Quad as an Asian NATO needs to be seriously explored and its military component defined. Further, Delhi can also help shape the narrative of a new alliance of democracies, building on Secretary Pompeo’s recent speech at the Nixon Library. The scope of the India-US strategic partnership could be compared to repositioning of the US-France alliance during the 1960s, when France quit NATO but made a compelling argument that Paris could be a better geopolitical ally to Washington without a formal military treaty.

On the economic front, India’s decision to constrain Chinese presence in its digital space has received approbation and is also having a wider impact globally, with the United States looking to ban Chinese digital applications. While Delhi and Washington are making attempts to address their bilateral trade disagreements, there is also a need for India and the U.S. to coordinate strategies in response to the Made in China 2025 Policy. Moreover, the possibility of India, the U.S. and other Quad members working on connectivity projects in the region requires greater attention. With the U.S. elections around the corner, India and its friends in Washington have to work continuously to ensure that the gaze of U.S. policymakers is not distracted from China’s provocative actions. Irrespective of the outcomes of the U.S. election, Washington is unlikely to tone down its criticism of the CCP given growing concerns regarding Chinese belligerence among US government institutions and policy establishment. The U.S. deep-state is also likely to maintain its current stand of differentiating between the CCP and the Chinese people.

India’s relationship with China is at an inflexion point. As the world becomes increasingly multipolar, India should emerge as a pole that collaborates closely with the U.S., the West and other like minded states which adhere to the rules-based order. Delhi and Washington should devise an appropriate joint response to the impending challenge of facing a military standoff in a Himalayan winter. It should be recognised that Asia’s balance of power will be determined to a large extent in the Himalayas and the free and open  Indo-Pacific will similarly be shaped mainly by the success of the India-U.S. partnership.