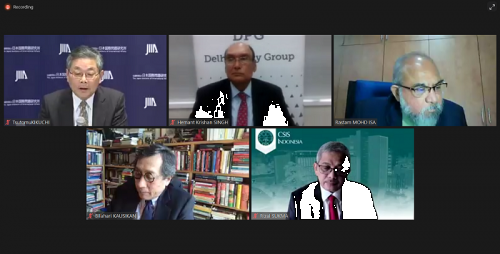 Professor Kikuchi, Ambassadors Kausikan, Rastam and Sukma, greetings from New Delhi. Allow me to also thank Ambassador Kenichiro Sasae and the JIIA for inviting me to join this session of the Tokyo Global Dialogue #2.

· I will be providing a personal perspective from India.

· While I do not claim to be speaking for South Asia, I can say this: as a distinct civilisational space, South Asia has historically been connected with Southeast Asia and beyond for over two millennia.  Importantly, it has never been, at any point in history, under the influence of China. India’s civilisational heritage has, on the other hand, traversed Tibet and Xinjiang into China and further east upto Japan. It has also radiated east by sea upto Bali.

· As I see it, a stable and balanced order in an Asia that encompasses the terrestrial and maritime geo-strategic space of the Indo-Pacific must only be multipolar, not China-dominated or US-centric.

· As we heard at the opening session yesterday, the centrality of the Indo-Pacific in the global system has arrived and its footprint is growing. European powers are coming on board. In strategic terms, the Indo-Pacific is a 21st century, post-Western construct.

· The Indo-Pacific is not the Asia Pacific, and it is Indo-Pacific stability, based on the confluence of the two oceans, which is the subject of the ongoing strategic transformation we are discussing today. The Western Pacific will remain a contested space; the Indo-Pacific balance of power will ultimately be determined in the Indian Ocean. It is important for our friends in Japan to understand this, as they sometimes speak Indo-Pacific but act Asia Pacific.

· Over the past year, the Indo-Pacific has witnessed even more flagrant challenges to rules-based order.  It has also seen growing tensions, not only between the US and China but others as well, in most of which China remains the common factor.

· Most of Asia is comprised of relatively new nation states who value their sovereignty. An end to transgressions against territorial integrity, or against the status quo where disputes exist, is a fundamental prerequisite for a rules-based order. Can the nation states of the Indo-Pacific shape a collective regional response to meet this challenge?

· A related question also is, will the nations of East and Southeast Asia continue to seek economic benefit with China while expecting the US to provide for their security, without making contributions to the regional balance?  What are the viable alternatives?

· So, Indo-Pacific nations cannot remain unaffected by US-China competition and rivalry (unlike Europe, which believes it can and has so signalled). Realist considerations of self interest will drive policies, but nations will face dilemmas as room for ambiguity shrinks.

· As China seeks to propagate the narrative of its inevitable hegemony, its behaviour is marked by combinations of unilateral assertion, coercion, deception and arrogance. Is that conducive to regional harmony?

· Now, the main source of China’s influence is economic interdependence, which it has weaponised. With China’s rapid economic recovery and the conclusion of RCEP, its heft has grown in East and Southeast Asia.

· China demands equality and mutual respect from the US even as it persists with revisionist geopolitical expansion aimed at overwhelming US power to secure regional dominance. In other words, a revisionist China is disrupting regional order and the problem is the US will not go away.

· It is no surprise that trust in China has receded. ASEAN nations and Japan now face a new challenge from China’s decision to authorise its coast guard to enforce territorial jurisdiction even in disputed waters. Japan is struggling with how its Coast Guard can respond; can Japan give up its self imposed constraints on hard power?

· The challenge China poses must ultimately be met in its entirety and across multiple domains. That is a tall order, but piecemeal approaches will work only to China’s advantage.

· President Biden has affirmed that the “US is back” and outlined his belief in alliances and multilateralism, his broad intentions towards Russia and China, and a domestically driven agenda on democracy and climate change. His administration has begun to shape a long term approach to meet China’s adversarial challenge. That said, domestic constraints and the inward direction of American power will persist.

· There are indications of some continuity in US policy towards the Indo-Pacific and the central role of the Quad in meeting defining challenges. To build US credibility in this region, Biden will need to lead from a position of strength and the example of US power. Leading with diplomacy alone will fail.
· US leadership is essential for Indo-Pacific order, but regional allies, partners and middle powers will have to assume much greater responsibilities. The US will not assume this burden alone. Free riding is over.

· India is an independent, standalone power with autonomous strategic capability. It supports an open, inclusive, stable and multipolar rules-based order in the Indo-Pacific.

· India’s example of a political, economic and military response to China’s recent aggression on its border sets an important benchmark for Asian nations.

· Clearly, the policies of India and East/Southeast Asia on economic engagement with China are not aligned.  India is decoupling, East and Southeast Asia are becoming more dependent.

· Looking at the long term, the continued growth of India’s economic and military power in the coming years will remain critical for achieving strategic balance in the Indo-Pacific. India welcomes internal balancing contributions from its partners; it does not seek external balancing commitments. That is the essential difference between “allies” and “partners”.

· The strategic orientation of India-US relations is driven by their shared and converging interests and will continue to gather momentum.

· India and Japan cannot take each other for granted and must continue to build stronger bilateral relations, expand third country cooperation on regional connectivity and intensify security cooperation, particularly in the Indian Ocean.

· The principles of a rules-based Indo-Pacific order reaffirmed by the Quad Foreign Ministers on February 18, 2021, plus the Quad’s support for ASEAN cohesion and centrality, the AOIP and the EAS, provide the basis for a partnership to jointly advance a stable and prosperous, multipolar, Indo-Pacific region.